PROJECT SPICER is a space for notes, essays, and information on the work of San Francisco poet Jack Spicer. Anyone with an interest in Spicer's work is welcome to join. If you'd like to do that, or if you know of something you think I should link to from this site, write to me at agricevich@gmail.com.

Among the good handful of excellent essays on Spicer's work, almost none seem to really examine how the poems work as poems, focusing instead on Spicer's poetics and the situation in which they place the poet, or on his range of cultural reference and context (the most significant exceptions I've found are Ron Silliman's "Spicer's Language" and bits of Peter Gizzi's "Jack Spicer and the Practice of Reading"). In these notes I'm thinking about the dynamics of the poetry, the ways in which they shift speed, direction, rhythm and tone, all of which plays an enormous part in the dizzying urgency of the writing. I'll take some of Spicer's metaphors as a cue, but (for instance) where he talks about the relation of the poet to the "Outside," I want to shift focus to how this Outside works on and in the poem. This will just be a discontinuous collection of paragraphs, trying to get it down rather than to craft a proper essay.

--If I take the poem (in addition to the poet) as a radio, through which messages course. The texture of a Spicer poem is not that of a constant channel-switching. More appropriate would be the radio in a car driving through the countryside, in the range of multiple stations at once, each with its own volume, tone, dynamics, speed, style and degree of "direct address" (or lack thereof) to the listener, regularly passing through fields of static.

--Already interfering with the radio metaphor, I'll play with this one:
The Martian/Outside/X has a language whose energy dynamics (the way the character of grammatical, syntactic, rhythmic, sonic and semantic motion shift in the course of an utterance) are different from those of the language to which the poem (through the poet) has access--the material the Martian finds available for use. In order to emulate the statement It wants to make, the Outside has to model the dynamics of that statement by finding "energy states" in the available language that ordinarily don't go together and juxtaposing them. These new, "Martian" dynamics use not only drastic shifts, but also sudden negations, abrubt repetition, and other forms of highly unnatural disruption of whatever dynamic a particular moment might enact.

--The shifting in a Spicer poem is not a constant jitter and jump-cut. It's a swerve between different dynamic conditions, and the nature of any swerve is unique, has its own force, speed and curve, because the nature of the swerve is determined by the nature of what comes before and after it (on occasion, one does get a cut, but that has a unique dynamic as well, as when a car hits a big bump and jumps into the air for a second--or one gets a "skip" like the analog skip of a record--the punctuation is palpable, and a puny digital skip can't approximate it).

This distinguishes it from at least two other poetic modes:

1) Constant montage, in which the overall surface of a work takes on a paradoxical uniformity--a smoothness of ubiquitous fracture--by virtue of the consistency of the cuts, the similarity of the interruptions (and/or the parts) and the equality of the distance between parts (or, because "distance" is not made into a compositional factor, the fact that the difference between kinds and degrees of distance doesn't become significant for the reader).

2) Radical formalist parataxis (e.g., the "new sentence" at its best), in which that dynamic of distance between parts is a primary aspect of composition, brought to consciousness in the experience of reading by assuming an initial state of radical separation between the parts and moving from there. In this case, the move from one unit to another is not felt as a palpable, visceral "swerve" from one dynamic state to another inside the poem; instead, a web of interconnections seems to gradually accrue, until it "takes off" from the text, floating "above it."

(note: One great possibility of the latter approach to writing: because the development of the network of connections across varying distances occurs at the level of the reading experience (and in its time), rather than seeming restricted to the level of the poem, the explicit consciousness of making connections, of synthesizing continuous experience--which ordinarily happens primarily habitually--can outlast the actual experience of reading, expanding the scale of the poem to include all of everyday life, at least for a time. One of my desires is for a writing that can take advantage of the effects of radical parataxis while also involving the crackling, dizzy energy, the friction between contradictory movements of rhetorical urgency, that characterize so much of Spicer's writing. This parallels my desire for poetry in which what the poem says (its "aboutness") and what it does (through formal means, sonic events, meaning made by juxtaposition and motif, etc.) condition each other dialectically, in shifting imbalances of comparative dominance, without either taking over the whole work. The serial poem is an ideal place to work out this kind of writing, since it's set up for the juxtaposition of smaller (within an individual section) and larger (sectional units). More on the serial poem later.)

I'll leave it at that for now.

More to do (besides adding a few citations to this post):
--close readings of particular poems in terms of these "dynamics"
--the serial poem
--notes on Gizzi's essay
--consequences for the poetic "I"
--why Spicer now?
Posted by Andy Gricevich at 10:58 AM No comments: 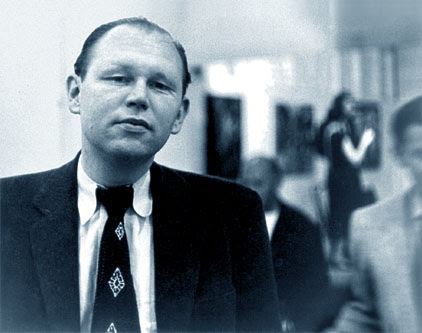 You are my favorite dead poet--and, if we living poets are also ghosts, you are among my favorite living ones. This is the month that comes around at least once per year, when I reopen your out-of-print Collected Books and tell myself that it's time to stop procrastinating and write about what I've found in your poetry, your lectures and the small number of your letters I've had the opportunity to read. I've started this blog (to which others will be invited) in order to push myself toward getting some of that work done. We'll see how well it works.

Soon your collected poems, My Vocabulary Did This to Me, will be published by Wesleyan University Press, thanks to the efforts of Kevin Killian and Peter Gizzi. I can't think of many publications in my lifetime that feel this important, for me personally and for contemporary poetry in general, which I sometimes see as stuck in some places from which your writing could help it escape, were it more widely read. What will you think? Will the likely blossoming of critical discourse around your work be a spring or an ocean of error, in which what's still undealt-with in your work gets left aside in favor of a picture of you as another prophet of the way we write anyway? Are my metaphors too mixed, too watered-down already? Will my own notes merely add a few drops of embalming fluid to your remains? (Actually, I can't remember whether you were embalmed). If you become an "influence" on the order of Duncan, Creeley, Olson--and I'm always surprised that you aren't already--will you turn over in your grave?

Only time will tell. Or it won't. In
any case, I thought I'd drop
you a line before I squawked
out word of this
to anyone else.

Andy
Posted by Andy Gricevich at 11:13 AM No comments: